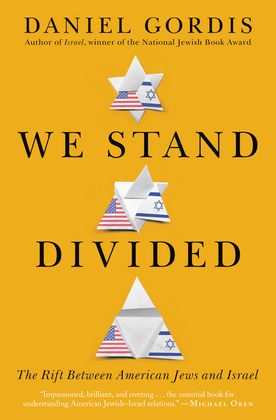 From National Jewish Book Award winner and author of Israel, a bold reevaluation of the tensions between American and Israeli Jews that reinterprets the past and reimagines the future of Jewish lifeRelations between the American Jewish community and Israel are at an all-time nadir. Most explanations pin the blame on Israel’s conduct: its handling of the conflict with the Palestinians, its attitude toward non-Orthodox Judaism, and the Jewish state’s dismissive view of American Jews in general. Others point an accusing finger at American Jews, insisting that in embracing America’s progressive values, many American Jews have become more sympathetic to Israel’s enemies than they are to the Jewish state.But these explanations, Daniel Gordis argues, miss the real causes for the divide. Gordis’s new book, We Stand Divided: The Rift Between American Jews and Israel, examines the history of the troubled relationship, showing that from the very outset—even before the state of Israel was created—the two communities’ dreams for a Jewish future had little in common.American Jews and Israelis built their respective communities to embrace different opportunities and in response to different challenges. Over decades, two radically diverging visions of Jewish life emerged. Thus, Gordis argues, as a first step to healing the breach, the two communities must acknowledge and discuss their profoundly different purposes and moral commitments. Only then can they forge a path forward, together.