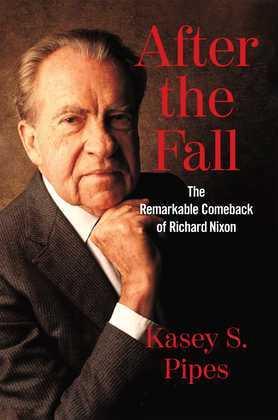 A Main Selection of the History Book Club! The Astonishing Comeback of Richard Nixon On August 9, 1974, Richard Nixon became the first and only U.S. president to resign from office—to avoid almost certain impeachment. Utterly disgraced, he was forced to flee the White House with a small cadre of advisors and family. Richard Nixon was a completely defeated man.        Yet only a decade later, Nixon was a trusted advisor to presidents, dispensing wisdom on campaign strategy and foreign policy, shaping the course of U.S.-Soviet summit meetings, and representing the U.S. at state funerals—the very model of an elder statesman. How did he do it? Nixon leveraged his still sharp mind, his peerless political instincts, his deep connections with foreign leaders—but, above all, his stubborn refusal to accept defeat—to achieve a political restoration as astonishing as the fall that preceded it. Kasey S. Pipes, advisor to President George W. Bush, tells the fascinating story of Nixon’s comeback. Using unprecedented access to the private post-presidential documents at the Nixon Library, Pipes reveals inside information that has never been reported about Nixon’s successful campaign to repair his reputation and resuscitate his career, including:   The true story behind the supposed medical “hoax” to get Nixon out of testifying at the Watergate trials of his aides in Washington The strategy behind Nixon’s apparently accidental on-air “confession” of the Watergate coverup to interviewer David Frost How Nixon’s advice on the Strategic Defense Initiative (SDI) shaped Ronald Reagan’s negotiations with Gorbachev—and changed history How Nixon traveled to China after Tiananmen Square to help preserve the U.S.-Chinese relations that he had opened up years earlier The Saturday morning presidential radio address: a Nixon idea Nixon’s surprising friendship with Bill Clinton After the Fall is the gripping and never-before-told story of one of the most remarkable reversals of fortune in American political history.